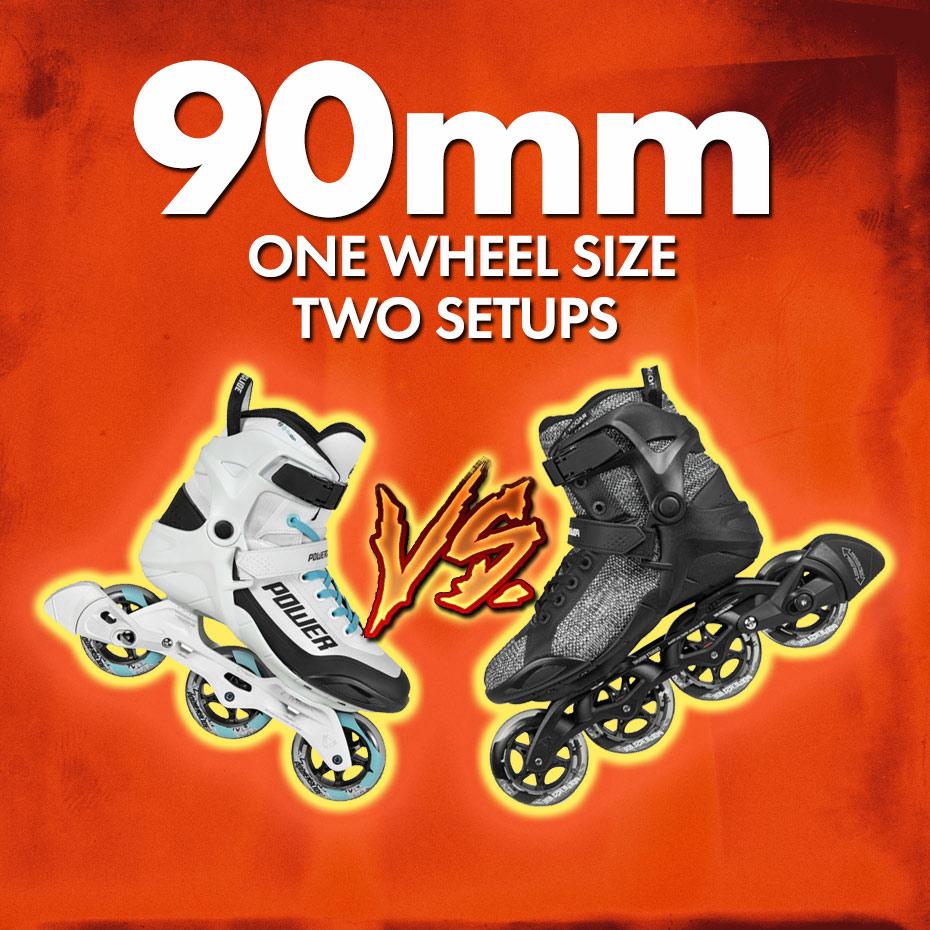 Did you know that 90 mm wheels in inline skates are relatively fresh invention? The very first wheels of this size hit the market only after 100mm wheels were released. 90’s were made to get around limitations of 165 mm mounting system and at the same time to squeeze last bit of speed out of it. Thing is, this mounting system makes it impossible to create a low 4x100 mm frame because of position of front mounting point, which is placed directly above second wheel in such setup. Skate manufacturers tried to get around this limitation by using hybrid frames – 100-84-100-100 at the beginning (as 84mm wheels were already on the market for years). To provide a better roll and make setup faster, this was later upgraded to 100-90-100-100 setup.

Finally, engineers from Fila have decided to move the problematic front mounting point 3 cm forward, creating 195 mm standard and allowing for a full 4x100 setup. This resulted in hybrid frames being a thing of the past (at least until 110mm wheels arrived – but that’s another story), but what about 90 mm wheels? Have they suddenly become obsolete? No, quite on the contrary - as it turns out, it’s a maximum wheel size that can be used with 165 mm mounting without making setup height too excessive. This made 4x90 a pretty popular choice in fitness skates and was sporadically used in freeskates too – it’s worth to mention here a hugely underappreciated Rollerblade Fusion X7, which were way ahead of their time and quite good Seba FR1 90, which came with excellent quality frames.

In recent years, popularity of 90 mm wheels was in decline. The reason is, of course, a rising popularity of triskates - boom started by Powerslide. Fitness and urban skating segment are dominated by 3x100 and 3x110 setups, which have few advantages over 4x90 – lower weight and better agility while keeping similar top speed, for starters.

At this point some could say that a fate of 90 mm wheels is sealed, at least in fitness skates. It’s not true, though – such skates are still present in all major brands collections and even Powerslide, a company focused on three wheeled skates, is releasing new models equipped with fresh 4x90 Trinity frames. At the same time, we already have 3x90 setups available to buy. What are differences between the two?

For purpose of this comparison, we’ll use two new Phuzion skates from 2020 collection of German brand: Enzo 90 and Radon Freeze 90. Both are based on the same boot structure and come with Trinity mounting, solving the problem of height difference for good. 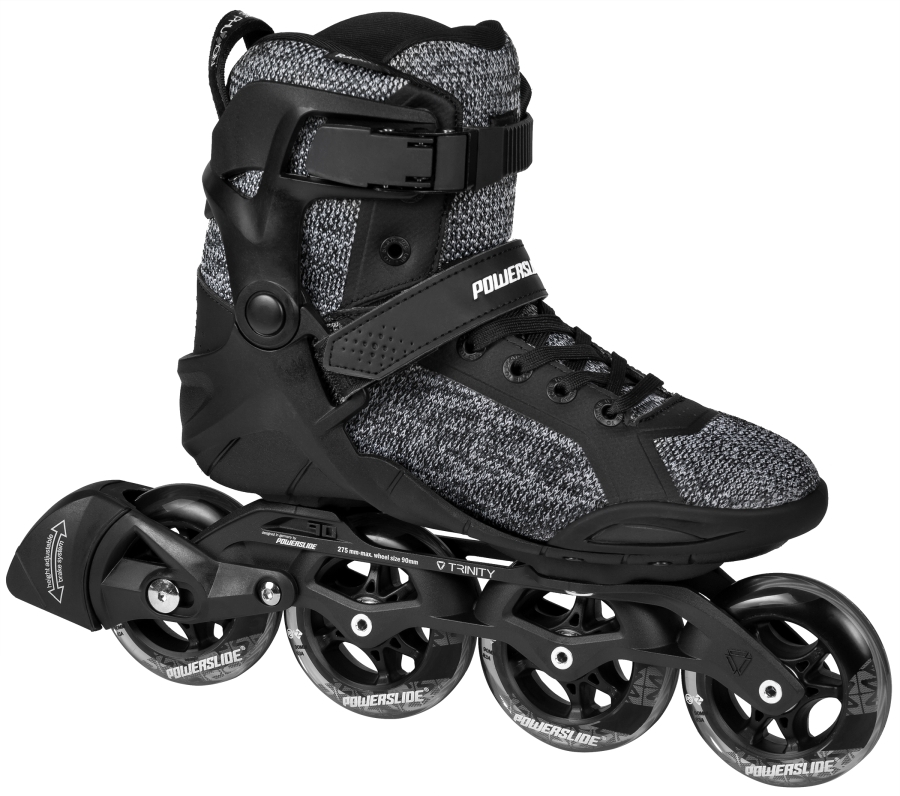 4x90 comes out with upper hand when it comes to speed. Wheel base is longer, as shortest possible frame for four 90 mm wheels measures 273mm. Compared to shortest possible wheel base for 3 wheels of the same size – measuring only 182mm – this is pretty significant length. Of course, no one makes 182mm 3x90 frames – these would be simply impractical. Currently, the shortest frame on the market for this setup is 205mm long and most of the skates are coming with frames of about 230-240 mm length.

As you can see, 4x90 setup is 3-4 cm longer than 3x90, which makes for a significant difference in terms of stability. The skates aren’t as prone to vibration at high speed and you can go for a lower, deeper and stronger push. Taking a look at speedskating frames, it’s easy to see that even 3x125mm ones are made to be long for these reasons – even though this wheel configuration can be as short as 255 mm.

Beginners for sure will find longer wheelbase beneficial when it comes to forward and back balance – it’s much harder to slip out and fall. Moreover, four wheels give better roll than three (as long as we are talking about the same size in both cases) – so, after building up speed, it’s way easier, less tiring to keep it. You can skate fast for longer.

Having four wheels down on the ground means smoother skating and better vibration dampening. Moreover, as four 90mm wheels are close to each other, they roll over all surface cracks and other imperfections with ease.

Reading the above you may think that it’s a lost cause for 3x90 setup. But it simply isn’t true. It is not a worse or better choice; it’s simply a different skate type, fit for different purposes and style. 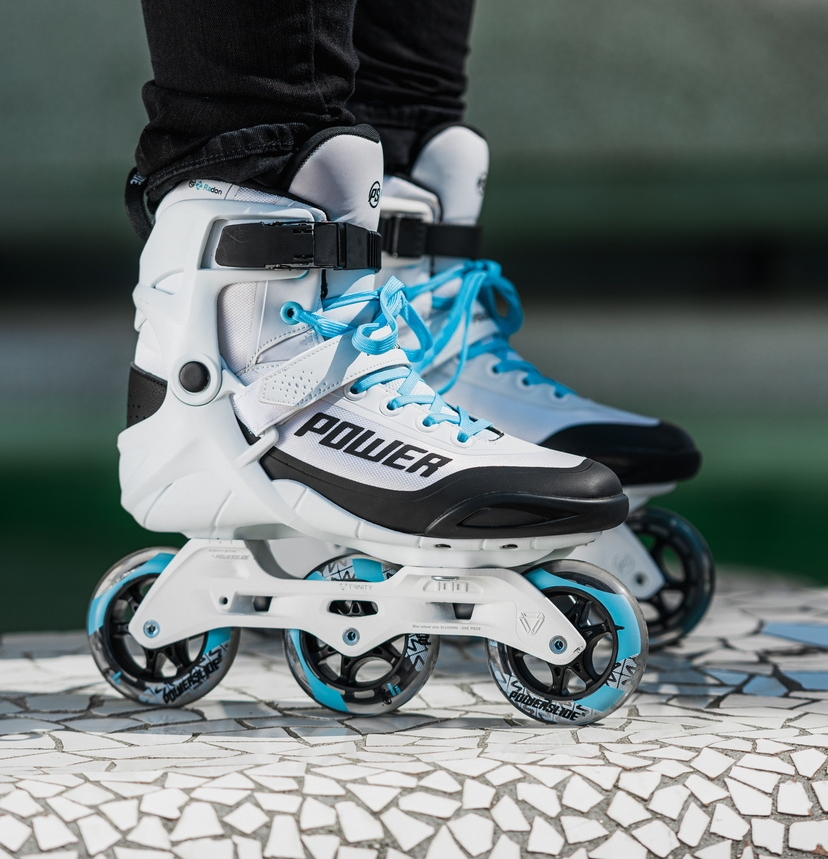 Where 3x90 clearly wins, is manoeuvrability. Turning on long, 4x90 frame is not easy and requires a decent skill in crossovers, especially on tight corners. Turning on shorter (in fact, much shorter) frame is piece of a cake – it is pure physics. In addition, the middle wheel in triskate acts like a pivot point, improving agility even further.

Advantages do not end here. Shorter frame, one wheel, one spacer, one axle and two bearings less means significant weight reduction. Skate is lighter; ride is less tiring and more pleasant. This, coupled with easiness of control over skates makes 3x90 really appealing to newcomers.

Wheel number is a double-edged sword, though – while three wheels accelerate faster, they also lose speed in similar fashion. This means that to keep your top speed, you have to work more for it. Short frame doesn’t provide as good base for push as longer one, it also less stable at high speed. With only three wheels, the spaces between them are significant and this makes setup behaving worse on uneven surfaces. It also channels more vibrations.

You won't know if you won't give them a go!

To sum it up, both setups have advantages and low points. What a difference one wheel can make! In both cases, it’s worth giving 90 mm wheels a go. We recommend 4x90 for skating long distances and intense fitness training. 3x90 is a very good choice for anyone looking for agile, light setup for more fun style of skating or urban fitness, where superior manoeuvrability may come in handy.

Both skates mentioned in this article: Radon Enzo 90 and Radon Freeze 90 can be found in our shop. Both are great performing models with great quality at mid-level price of fitness skates. If you are interested in different skates on 90 mm wheels, you can find them here.