What is Powerslide - Trinity 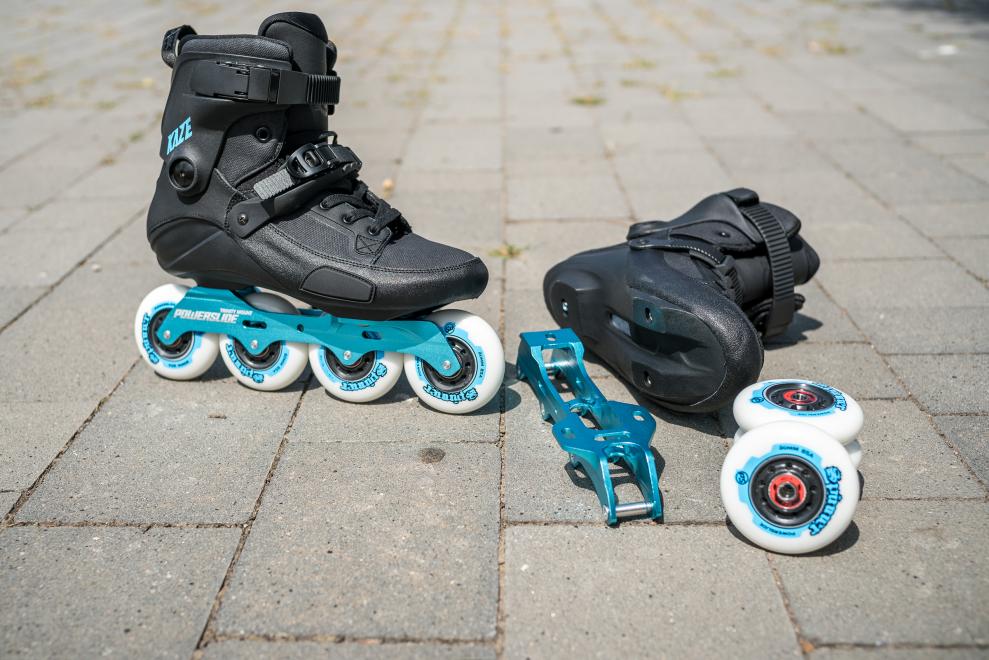 WHY THE WORLD NEEDS IT?

With bigger wheels the center of gravity of skates gets higher, control gets more imporant and also support. We at Powerslide as the pioneers of big wheels are aware of these facts and looked for solutions to make skates not only faster, but also more secure, agile and better to control.

With bigger wheels the force gets higher too, more torque.

WHAT DID WE WANT?

So we looked at different sports, fixations in different areas and at other disciplines of skating. Inline hockey frames use

FRONT WINGS FORMING A CHANNEL SINCE AGES FOR ONE REASON: TO LOWER THE CENTER OF GRAVITY.

Hockey is the fastest game in the world and the lower skate is easier to maneuver, easier to handle and easier to control. This was our goal and mission for the new Trinity frame concept. The construction of hockey skates inspired us to

FORMING A DEEP GROOVED CHANNEL FOR THE WHEELS

It was just natural for us to

INTEGRATE THE X-SLOT MOUNTING INTO OUR TRINITY 3-POINT MOUNTING

frames as well. It gives the skater the opportunity to shift their frames to the front and back and even sidewards, which enables them to customize the frame position under their boots to their skating skills and needs to optimize their performence.

What THE SKATERS SAY:

When I saw Kaze skates for the first time in the catalogue, I thought that it have no sense. After the first ride on the Kaze with trinity mount and frames 243mm (3*110) I was surprised. Skates with trinity mount are feeling differently compare to simple skates. I feel it like I´m riding on the 80mm wheels, but they are faster. Skates are more stable than simple skates.

Now I´m skating on the Tau skates with 243mm (3*110) frames and they are awesome. These skates are the best for street skating. You can easily accelerate on it. The best advantage of trinity mount is that boot is lower than on the simple skates and you more opportiunities: firstly your avarage speed is more on approximately 4-5 km per hour. Secondly vibration of the ground is lower. Thirdly it is very comfortable, the leg does not fall sideways.

About slides. This skates are giving you amazing control when you are sliding. In this discipline you have to gain high speed quickly, and trinity skates give you that. Due to low boot position you are feeling slide so good, and you can do some combos easily.

Actually the TRINITY mount is the revolution in the skate’s world.

I don’t like to excite the news because often they become a dud but in this case it was different.

When I first time skating on trinity mount I knew at once that I will love it. I felt that from now I don’t want to on riding anything else. Speed, agility and brilliant power transmission to the wheels. Trinity- new reality.

“The 3 wheels frames are perfecto for the city, control+speed”

At first (when I saw the pictures of early prototypes) I wasn’t sure about the concept and thought it would simply be a gimmick. But seeing/trying is believing! Trinity completely changes everything. 3x125mm short frame with Kaze boot was a revelation - it skates completely unlike any other setup I’ve used and I fell in love with it instantly. The efficiency of push, the low height, the speed... but other setups were fun, too!

3x110 is probably my go-for setup when Tau and Kaze will hit the stores, combining speed, agility and relatively low height. Perfect for urban cruising. There is exceptional “solid” feel to whole setup and accelerating on it is better than on everything else. These skates feel like a nextgen sports equipment, almost like a superpower. Trinity is simply a killer feature - something no other brand can offer or compete with. In fact, I think long-term goal for Powerslide should be to introduce Trinity system in as much types of skates as possible - it’s

Love that lower centre of gravity that Trinity provides, stability and how agile and responsive it is! Also tried them with 3 x 110 on one of the Nightskatings events in Warsaw and was super fast with the feeling of something like 80mm wheels underneath :) and yeah...It really reduce vibrations on rugged terrain!

Trinity is not only new mounting system but definitely better quality of skating! I’ve never felt so stable and integrated to skates before.

The feeling you get while skating with trinity mount is just something else. Big wheels and lack of clunky feel of flat 4x80 makes you not want to go back. It’s definitely something I’d love to skate in everyday.

Some time ago Tomasz asked me to do this. That’s what I answered him: “I have been skating on 3x90mm and I forgot I have such a big wheels. I felt like on my evo 72mm. No doubts this system will make a change”.